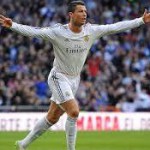 Cristiano Ronaldo is hoping that Manchester United can end their European exile and qualify for the Champions League this season. The Red Devils face Manchester City on Sunday, hoping their late draw with Chelsea last week will spur them on against their out of form rivals. Whilst 9 points off of leaders Chelsea, United are looking to firstly step back into Europe, having invested heavily during the summer. Under David Moyes, United missed out on European qualification last season and now find themselves in the unusual position of watching Europe's elite on TV every fortnight. Ex-United man … END_OF_DOCUMENT_TOKEN_TO_BE_REPLACED