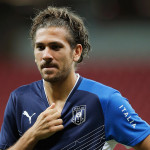 Atletico Madrid have today completed a deal to sign Alessio Cerci from Torino after the forward completed a medical with the La Liga champions. Italian international Cerci joins on a three-year deal for an undisclosed fee. 27-year-old Cerci scored 11 times for Torino last season as he and Ciro Immobile formed a formidable forward duo for the Turin club. He helped them to qualify for the Europa League, but Serie A's leading scorer Immobile departed for Borussia Dortmund, and Cerci followed him out of the Torino door. Atletico, who struggled past lowly Eibar at the weekend, need to reinforce … END_OF_DOCUMENT_TOKEN_TO_BE_REPLACED