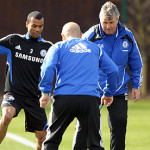 Chelsea defender Ashley Cole has landed himself in trouble after allegedly shooting a young fan with an air rifle at Chelsea's Cobham training ground last weekend. Cole, 30, reportedly brought a calibre .22 air rifle into training and whilst fooling around with the gun pointed it at a young work-experience student and shot him - seemingly unaware that the gun was loaded. Reports suggest Cole has received a huge dressing down about the incident and Chelsea staff have met with the boy's parents this week to discuss the incident. The Blues are currently in 5th position in the Premier League … END_OF_DOCUMENT_TOKEN_TO_BE_REPLACED