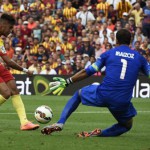 Scotland’s upcoming independence referendum aka whether the Scottish people will opt towards a new beginning as an independent state or continue with the old order, has sparked century old Catalan nationalist aspirations. Where on Thursday 11th September, National day of Catalonia, a reported 1.8 — 2 million took to the streets of Barcelona in mass demonstration, bringing the city to a standstill, to encourage a Scotland inspired independence vote from Spain. … END_OF_DOCUMENT_TOKEN_TO_BE_REPLACED