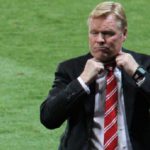 As quoted by Goal.com, Everton manager Ronald Koeman has dismissed claims that he is heading to Barcelona next season. Luis Enrique has been very successful as manager of Barcelona since he took over at the club back in 2014 but the Spaniard is going through a rough patch at the moment as the Catalan giants have struggled so far during the current campaign. Recently claims have been made that the Barcelona hierarchy could well replace Enrique as manager at the end of the season and Italian outlet Sport Italia revealed that the Catalans had already begun talks with Everton boss Ronald … END_OF_DOCUMENT_TOKEN_TO_BE_REPLACED

According to reports from Spanish publication Don Balon, Barcelona have shortlisted Everton boss Ronald Koeman as a potential replacement for current manager Luis Enrique. Luis Enrique has led Barcelona to a whopping eight trophies since taking over the reins at the club back in 2014 but despite such success, the 46-year-old’s future at the Nou Camp has been put into doubt due to the team’s poor performances during the current campaign. As a result, it has been claimed that Barcelona could potentially consider replacing Enrique at the end of the season and a host of names have been … END_OF_DOCUMENT_TOKEN_TO_BE_REPLACED