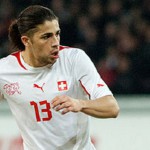 Giants Real Madrid and Manchester United are involved in a head to head battle to secure the services of Swiss international Ricardo Rodriguez, according to reports from the Express. Ricardo Rodriguez has managed to earn a reputation as one of the most promising young full backs in the world with his performances for German side Wolfsburg during the past few years. As a result, it has been no surprise whatsoever to see a host of top clubs expressing their interest in signing Rodriguez and with the January transfer window fast approaching; the 23-year old is likely to be linked with a big … END_OF_DOCUMENT_TOKEN_TO_BE_REPLACED