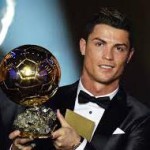 Cristiano Ronaldo was the deserved winner of the Ballon d'Or in Zurich last night. As he fought back tears, the Real Madrid wizard described it as “a very emotional moment.” Fifa had produced a very strong shortlist this year: Ronaldo, Barcelona's Lionel Messi (winner on the last four occasions), and Franck Ribery of Bayern Munich. Despite this high quality opposition Ronaldo had been as short as 100 to 1 ON to win the award, and it's not hard to see why. Ronaldo scored an incredible 66 goals in 56 appearances for club and country during 2013, and picking up his second Ballon d'Or cements … END_OF_DOCUMENT_TOKEN_TO_BE_REPLACED