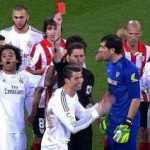 Cristiano Ronaldo received a farcical red card last night, as Real Madrid were held 1-1 by in form Athletic Bilbao. It was a cagey first half, Madrid had more attacking intent but lacked the killer touch in front of Iraizoz's goal. Benzema and Ronaldo both looked out of sorts. Gareth Bale was missing again, despite Ancelotti having indicated that he should be fit for the match. Bilbao seemed determined to hang on to their proud home record. They are yet to lose in the league at their new San Mames home. The match was becoming increasingly tetchy. Madrid knew that a win would take them into … END_OF_DOCUMENT_TOKEN_TO_BE_REPLACED