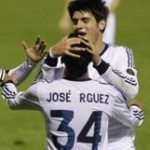 Real Madrid manager Jose Mourinho has spoken out against recent criticism concerning the club's Castilla team. The Portuguese boss had come under scrutiny recently because of supposedly blocking aspiring players from the B team from playing in the first team. However, Mourinho has responded to these statements by blaming the club's youth system and Castilla head coach Alberto Toril. The Spanish soccer press had been stirring up accusations all last week accusing Mourinho of buying his way out of trouble and … END_OF_DOCUMENT_TOKEN_TO_BE_REPLACED