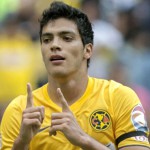 Atletico Madrid are in need of strengthening their attack and Raul Jimenez may be the last piece Simeone needs for his new look attack. The departures of Diego Costa and Adrian Lopez this off season have left Atletico without two key attacking players that played a vital role in their La Liga championship run. Simeone has already signed Mario Mandzukic from Bayern Munich and Antoine Griezmann from Real Sociedad to supplement his team’s attack. Both players are great signings and no doubt will provide goals all throughout the season. ‘El Cholo’ is looking to add one more striker to the fold and … END_OF_DOCUMENT_TOKEN_TO_BE_REPLACED