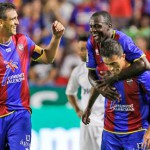 Just when you thought the La Liga title race couldn't get any more predictable and one-sided, the football gods throw us a much-needed curveball in the form of this season's over-achievers Levante - a side very much expected to face another relegation battle this season have had a miraculous turnaround in fortunes and after an impressive start, quite unbelievably sit in the lofty heights of 3rd place in the La Liga table after already claiming scalps off football powerhouses Real Madrid, Malaga and Villareal so far this campaign. … END_OF_DOCUMENT_TOKEN_TO_BE_REPLACED