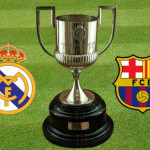 With the recent trend of top sides putting out weakened teams for their domestic cup competition, an act claimed to be devaluing the prize and taking away that cup magic. It couldn't be more different in Spain where last year’s Copa del Rey final was fiercely fought in Valencia's Mestalla stadium by the giants of Spanish football Barcelona and Real Madrid. Fuelled by Jose Mourinho’s desire to wrestle some trophies away from Pep Guardiola’s Barca, who it seems just want to win every prize put in front of them, a new found competitiveness had revitalised the Copa del Rey. … END_OF_DOCUMENT_TOKEN_TO_BE_REPLACED