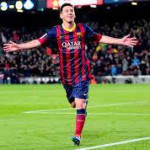 Lionel Messi made his much anticipated return to the Barcelona team last night and, as expected, he returned with a bang – scoring two goals in Barca's 4-0 victory over Getafe in the Copa del Rey. Some experts had speculated that Messi might start last night's game but, as predicted here on La Liga Blog, he began on the substitutes bench. Gerardo Martino waited until the 63rd minute to send the Argentine maestro on as a substitute for Andres Iniesta but when he did the atmosphere at the Camp Nou lifted. It was the ideal moment for his return. Barcelona were already two nil up by this point … END_OF_DOCUMENT_TOKEN_TO_BE_REPLACED