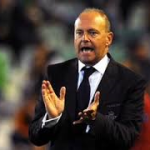 Former Real Betis boss Pepe Mel has ended negotiations with West Brom concerning their vacant managerial position after a reported disagreement over backroom staff. Mel, who guided Betis to promotion in his first season and European qualification in his second, was looking the most likely candidate to succeed Steve Clarke but negotiations have broken down and Mel has returned to Spain. … END_OF_DOCUMENT_TOKEN_TO_BE_REPLACED