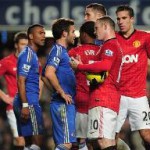 Spanish midfielder Juan Mata's move from Chelsea to Manchester United could be scuppered in the unlikeliest of ways – by Manchester United manager David Moyes. Talks are at an advanced stage between Mata and Manchester United advisors. His relationship with Jose Mourinho has broken down, and Mata doesn't feel that he will get the chances that he deserves at Stamford Bridge this season. There is fierce competition for a place in the Spain midfield at this summer's World Cup, and Mata knows that he needs to grab as much game time as possible before then with him currently at 6/4 to make the … END_OF_DOCUMENT_TOKEN_TO_BE_REPLACED