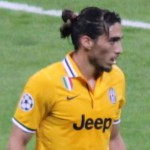 Liverpool are on the verge of signing out of favour Juventus defender Martin Caceres, according to reports from the Calico Mercato. Liverpool were always in the market to sign a new defender during the January transfer window and the recent injuries to the likes of Martin Skrtel, Dejan Lovren, Mamadou Sakho and Kolo Toure has further accelerated the Reds’ pursuit to bring in a centre back soon. The likes of Neven Subotic and Andrea Ranocchia have been linked with a move to Liverpool in recent times but now according to reports from Calico Mercato, it has been claimed that the Reds are close … END_OF_DOCUMENT_TOKEN_TO_BE_REPLACED