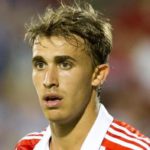 Stoke City defender Marc Muniesa has gone on to admit that he is looking to make a move to Real Betis during the upcoming January transfer window. Marc Muniesa has been a relative success since joining Stoke City from Barcelona during the summer of 2013 but the defender has had playing time hard to come by during the current campaign. Although he did score during Stoke’s 2-0 victory over Burnley on the weekend, Muniesa has played only three times in the Premier League this season and it is clear to see that the 24-year-old is not an automatic first choice for manager Mark Hughes. As a … END_OF_DOCUMENT_TOKEN_TO_BE_REPLACED