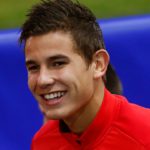 According to reports from the Independent, Manchester City are considering a big money swoop for Atletico Madrid defender Lucas Hernández. Lucas Hernández broke into the Atletico Madrid first team back in 2014 and although the 20-year-old is not a regular as of yet, he is touted for a huge future at the Vicente Calderon due to his immense potential. A number of top clubs are aware of Hernández’s potential and now according to reports emerging out of the Independent, claims have been made that Manchester City are currently considering a whopping £20 million move for the … END_OF_DOCUMENT_TOKEN_TO_BE_REPLACED