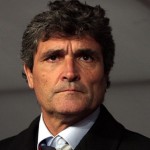 Chelsea are considering replacing the recently departed Jose Mourinho with former Real Madrid and Tottenham Hotspur manager Juande Ramos, according to reports from the Independent. Chelsea wielded the axe on manager Jose Mourinho on Thursday night following the Blues’ terrible start to the season and the club hierarchy have been very active in their search the right candidate to replace the 52-year old. The likes of Guus Hiddink, Carlo Ancelotti, Brendan Rodgers and Antonio Conte have all been mentioned as potential targets for Chelsea but now according to reports from the Independent, … END_OF_DOCUMENT_TOKEN_TO_BE_REPLACED