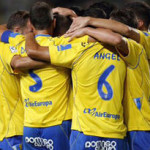 Sergio Araujo's 84th minute goal helped Las Palmas beat Real Zaragoza on away goals and promotion into La Liga for the first time in 13 years. Zaragoza travelled to Gran Canaria as favourites having won the first leg 3-1, but Las Palmas recorded a 2-0 victory which saw them through on away goals. Roque Mesa opened the scoring on 33 minutes to give the hosts real belief of finding a second as Araujo left it late to clinch promotion. The moment was sweet for Las Palmas boss Paco Herrera who previously managed Zaragoza between June 2013 and March 2014. Veteran Juan Carlos Valeron, the … END_OF_DOCUMENT_TOKEN_TO_BE_REPLACED 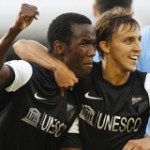 As the new La Liga season cools off after a rip-roaring opening matchday we have been able to witness many similarities and differences likely to feature more predominantly as the season progresses. Whilst Barcelona continued to pulverise the life out of teams bordering below the European qualification line like a well oiled machine even under new management our attention turned to another team shorn of a personality or two. It seemed as if Bilbao had gone away with their buccaneering European dynasty fable of last year and instead endured a tumultuous summer more reminiscent of a game of … END_OF_DOCUMENT_TOKEN_TO_BE_REPLACED