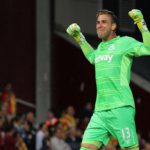 According to reports from the Chronicle, Newcastle United are currently holding talks over the signings of Joselu and Adrian. Newcastle United were expected to be very active in the summer transfer window but they have not quite been able to land their top targets so far and with the start of the Premier League campaign less than a fortnight away, things are getting a bit desperate for the Magpies. Nonetheless, manager Rafael Benitez is a man who has a lot of contacts and he will be looking to ramp up his efforts to bring in a couple of new players to St. James’ Park in the coming … END_OF_DOCUMENT_TOKEN_TO_BE_REPLACED