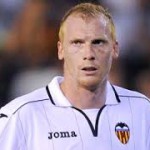 Valencia defender Jeremy Mathieu has issued a statement in an attempt to get his club negotiating with Barcelona ahead of a possible transfer. The club want up to €20m for the defender but Barcelona have been put off by the figure, offering around €14m initially. Mathieu, 30, was the subject of a bid from Barca but Valencia rejected the offer. Now desperate to clinch a deal to move to a club he calls 'the biggest in the world', Mathieu released a long statement clarifying his position and why he feels the club should reward his loyalty. "Valencia CF has an offer on their table from an … END_OF_DOCUMENT_TOKEN_TO_BE_REPLACED