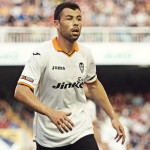 At 32 years old, Javi Fuego is the oldest player in the Valencia squad, the youngest and most inexperienced squad in La Liga.  At the end of the 2013-14 season, when some players chose to leave – Juan Bernat, Jérémy Mathieu – and others were told to leave – Ricardo Costa – Javi Fuego remained with the side. … END_OF_DOCUMENT_TOKEN_TO_BE_REPLACED