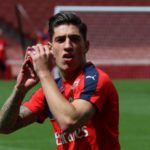 Arsenal defender Hector Bellerin has expressed his delight at Arsenal finishing in top spot of their Champions League group with a 4-1 victory over Basel. Heading into the final Champions League group A clash, it looked like Arsenal would have to settle for second place in the table as rivals Paris Saint-Germain needed a victory over minnows Ludogorets at the Parc des Princes to claim top spot. However, PSG went on to slip by managing only a 2-2 draw against Ludogorets and Arsenal most certainly capitalized by claiming an emphatic 4-1 victory over Basel, in turn sneaking into the … END_OF_DOCUMENT_TOKEN_TO_BE_REPLACED