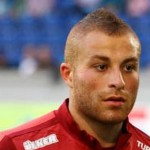 Premier League side West Ham United are involved in a head to head battle with Spanish giants Atletico Madrid for the services of Turkish international Gokhan Tore. West Ham United certainly stand a great chance of earning a place in the top four this season but in order to do so, one suspects that the Hammers will have to strengthen their squad during the January transfer window. As of now, West Ham have only secured the services of Sam Byram this month but there are a host of other attacking players set to arrive at the Boleyn Ground during the final week of the transfer window. Emmanuel … END_OF_DOCUMENT_TOKEN_TO_BE_REPLACED