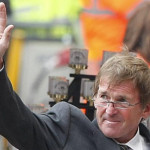 Liverpool's Kenny Dalglish had to settle for a draw in his first European match in charge this evening but his side still remain well placed to progress to the Europa League last 16. The visitors Liverpool looked strong from the outset but were unable to capitalise on a myriad of possession as it was Sparta's Manuel Pamic who went closest in the first period. Glen Johnson had the best chance for Liverpool after poking a shot just wide early into the second half but Dalglish's men, without injured captain Steven Gerrard, never looked like scoring in this forgettable bore-draw tonight. They … END_OF_DOCUMENT_TOKEN_TO_BE_REPLACED