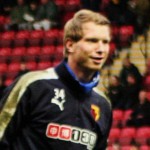 Watford have agreed to allow goalkeeper Giedrius Arlauskis to join Spanish side Espanyol on loan till the end of the season. Arlauskis arrived at Watford from Steaua București during the summer on a free transfer and had signed a four year deal with the Hornets. However, Arlauskis was largely used as a backup to Heurelho Gomes and was awarded only a single appearance in the FA Cup by manager Quique Sanchez Flores. The arrival of Costel Pantilimon from Sunderland during the January transfer window pushed Arlauskis further down the pecking order at Vicarage Road and as a result, the 28-year … END_OF_DOCUMENT_TOKEN_TO_BE_REPLACED