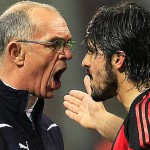 AC Milan's Gennaro Gattuso has been handed a four-match ban by UEFA officials today for his headbutt to Spurs assistant coach Joe Jordan following AC Milan's 1-0 defeat to Tottenham Hotspur. World Cup winning midfielder Gattuso headbutted Joe Jordan at the end of last Tuesday's last-16 Champions League match at the San Siro. Gattuso, who had immediately apologised for his behaviour did not escape punishment from UEFA officials who handed the ban at an official hearing on Monday afternoon. The itallian has been informed that he has three days to lodge an appeal if he chooses to do so. The … END_OF_DOCUMENT_TOKEN_TO_BE_REPLACED