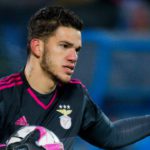 According to reports from Portuguese outlet, O Jogo (the Hard Tackle in English), Spanish giants Barcelona are currently eyeing up a move for Benfica goalkeeper Ederson Moraes. Barcelona have endured a stop start campaign so far and in order to boost their title aspirations, manager Luis Enrique is widely expected to be strengthening his squad during the upcoming January transfer window. A host of names have understandably been linked with a move to the Camp Nou over the past few weeks and now according to reports from Portuguese outlet O Jogo, claims have been made that the defending … END_OF_DOCUMENT_TOKEN_TO_BE_REPLACED