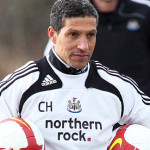 Chris Hughton has admitted he still has no idea why he was giving his marching orders by former club Newcastle United just two months on from his shock dismissal. Whilst speaking to the London Evening Standard this week, the ex-Republic of Ireland international revealed the circumstances behind his surprise exit from Newcastle back in December and his managerial aspirations for the future. Despite guiding Newcastle United to comfortable mid-table safety in his first full season back in the top flight and impressive wins over bitter rivals Sunderland and a 6-0 rout over Aston Villa, it … END_OF_DOCUMENT_TOKEN_TO_BE_REPLACED