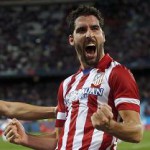 Atletico Madrid progressed to the round of 8 in the Copa del Rey last night, keeping alive their hopes of glory on three fronts. I was in Spain to witness their 2-0 victory over Valencia, and was impressed by their composure and ability to move up a gear when needed. Last week's first leg had ended 1-1 thanks to a late Valencia equaliser from Helder Postiga. With another draw against Barcelona last Saturday it was imperative that they returned to winning ways, but Valencia had set out their stall to frustrate Atleti. They look a stronger, more organised team under new coach Juan Antonio … END_OF_DOCUMENT_TOKEN_TO_BE_REPLACED