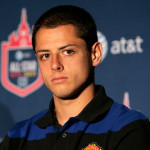 Two months ago, Javier Hernandez arrived in Real Madrid on a one-year long loan deal from Manchester United. Little by little the Mexican has proven to be a good long-term option for Carlo Ancelotti. Hernandez has made seven appearances with Los Blancos so far: four in La Liga, two in the Champions League and one in a Copa del Rey fixture. … END_OF_DOCUMENT_TOKEN_TO_BE_REPLACED

Valencia are one of the clubs interested in Manchester United striker Javier Hernandez, as the club look to offload the Mexican striker. Juventus are the other club rumoured to be in for Hernandez, with United likely to accept an offer from the highest bidder. Hernandez has wanted a move away from Old Trafford for over a season after being frustrated by the lack of playing time. This summer, he and Danny Welbeck have been linked with transfers away from United as Louis van Gaal puts his own stamp on a transforming team. United are said to have accepted bids of around £12m from both clubs for … END_OF_DOCUMENT_TOKEN_TO_BE_REPLACED