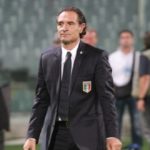 Cesare Prandelli has revealed that Valencia’s failure to complete the signing of Simone Zaza was the last straw which resulted in his resignation. Prandelli took over at Valencia back in September last year but after only three months into the job, the Italian surprisingly decided to resign from his post as manager. Following the departure from Valencia, Prandelli has gone on to take a swipe at the club hierarchy and has elaborated on the reasons as to what prompted him to resign from his position in such a dramatic fashion. The former Italian national team manager stated that one of … END_OF_DOCUMENT_TOKEN_TO_BE_REPLACED