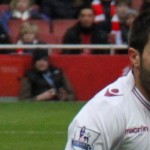 Premier League side Aston Villa are not prepared to allow Real Betis target Carles Gil to leave Villa Park anytime soon, according to reports from HITC. Gil has struggled for regular first team football at Villa this season and it is clear to see that the Spanish attacking midfielder does not feature in the plans of manager Remi Garde. As a result, it was widely believed that Gil would be leaving Villa during the January transfer window and La Liga side Real Betis were said to be keen on signing the former Valencia youngster. However according to reports from HITC, it has been claimed that … END_OF_DOCUMENT_TOKEN_TO_BE_REPLACED

Aston Villa are set to sanction the departure of Carles Gil during the January transfer window, according to reports from AS. Gil joined Aston Villa from Valencia during the January transfer window last season amid much hype and the Spaniard had initially managed to win over the Villa supporters with a couple of promising performances. However, Gil has struggled to bring about any consistency during his time at Villa so far and has rarely been used by new manager Remi Garde in recent times. Due to lack of regular minutes on the pitch as well as struggles in adaptation, it is believed that … END_OF_DOCUMENT_TOKEN_TO_BE_REPLACED