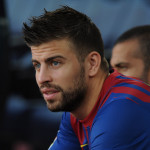 Barcelona play host to Sevilla on Saturday following a league hiatus that saw ten of its regulars clad in national colours, rather than the blue and red of Barca. The Catalan club entered the international break off the back of a win, albeit over a lowly Almeria side. It was hardly a performance to instil confidence into fans and players alike. Though they began their league campaign impressively under new coach Luis Enrique, October's 3-1 defeat in El Clasico at the Bernabeu and the subsequent 1-0 home loss to Celta Vigo have led to questions being asked. … END_OF_DOCUMENT_TOKEN_TO_BE_REPLACED