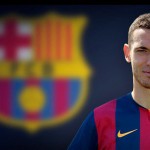 Barcelona come into Saturday`s fixture unbeaten in La Liga and have yet to concede a single goal after five outings. This opening certainly seems impressive on paper, however the Catalans received heavy criticism in midweek for failing to register a goal against Malaga at La Rosaleda. A rather limp header from Gerard Piqué was as close as they came to breaching Kameni`s goal in a game where the home side put on a masterful defensive display. … END_OF_DOCUMENT_TOKEN_TO_BE_REPLACED