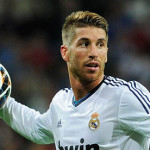 Real Madrid defender Sergio Ramos has hailed his teammate Cristiano Ronaldo, claiming that there are no words left to describe the superstar, according to Sports Mole. The 29-year-old has been breaking records since joining the Spanish giants in 2009 and has now claimed his 23rd La Liga hat-trick. His three goals secured the 3-0 win over Celta Vigo at the weekend for his side’s 18th consecutive victory and he has now overtaken Telmo Zarra and Alfredo Di Stefano in all-time La Liga trebles. … END_OF_DOCUMENT_TOKEN_TO_BE_REPLACED