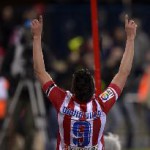 Atletico Madrid stormed to the top of La Liga with a 4-0 thrashing of Real Sociedad on Sunday. It was a night their former manager and player Luis Aragones would have been proud of. The scoreline is a little flattering, Sociedad are an in-form side and more than held their own in the first half. A David Villa goal, from a Diego Costa cross, on 38 minutes was all that separated the teams. Simeone's team were much better after the break. It was Costa himself who scored the second on 72 minutes. The naturalised Spaniard is finding his goal scoring touch again after a mini drought. Miranda headed … END_OF_DOCUMENT_TOKEN_TO_BE_REPLACED