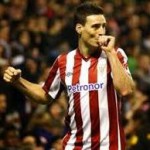 There have been five matches in La Liga so far this weekend, with significant results for clubs at both the bottom and top of the Primera Division. Here is the Sunday morning round-up. Athletic Bilbao 6-1 Almeria Ernesto Valverde's Athletic side continued their impressive campaign with a thumping victory over UD Almeria. Bilbao were three goals to the good within half an hour thanks to goals from Rico, Herrera and Laporte. Almeria pulled one back on 34 minutes through on loan midfielder Helder Barbosa but it was a brief respite. Aduriz and Ibai Gomez added further goals after the break before … END_OF_DOCUMENT_TOKEN_TO_BE_REPLACED