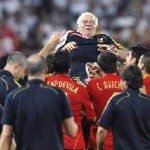 Spain, and the world of football, is today mourning the loss of the legendary Spanish coach Luis Aragones. Aragones died in Madrid this morning, at the age of 75. He had suffered a short illness, and his passing took many by surprise. His loss will be particularly felt by fans and former players of Atletico Madrid. He managed Atleti on four occasions, winning them the La Liga title and lifting the Copa Del Rey three times. Atletico will be holding an emotional minute's silence before their game against Real Sociedad on Sunday. As a player, Aragones made nearly 400 appearances for Atletico. A … END_OF_DOCUMENT_TOKEN_TO_BE_REPLACED