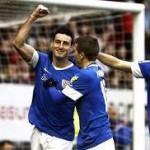 Athletic Bilbao eased to a superb 5-1 victory at Osasuna, cementing their place in the fourth Champion's League spot. Athletic's previously off-form striker Aritz Aduriz regained his scoring touch. He grabbed two goals and set up another for substitute Ibai Gomez. A man of the match performance. Osasuna are only three points from the drop zone now. Their problem all season has been scoring goals, but when Armanteros scored a tenth minute free-kick equaliser to cancel out a fourth minute goal from Athletic's Susaeta, things were looking promising. Little did they know that the floodgates were … END_OF_DOCUMENT_TOKEN_TO_BE_REPLACED