The English Premier League came to an undramatic close last weekend and this weekend it is the turn of Spain’s top flight to close its doors on what has been a season that has seen giants fall, minnows rise, and Barcelona come agonisingly close to an unbeaten season.

With just one round of fixtures left, we take a look at what is left to play for between the clubs currently in the top ten.

Absolutely nothing, especially after suffering that shock 5-4 defeat to Levante last time out, it means the chance to go through the season unbeaten is no more.

However, with the League title in the bag as well as the Copa Del Rey it has not been a bad season and ending the campaign some fifteen points ahead of great rivals Real Madrid will feel like another piece of silverware.

Barce officially end the season with a home tie against Real Sociedad on Sunday evening.

The fight for second is going to the wire as Deigo Simone’s men sit three points ahead of Real Madrid with one to play.

A point for Atleti at home to Eibar on Sunday will be enough for Atletico to finish the season as the top Madrid side and with a Europa League final to look forward too, Simeone can pat himself on the back for a job well done this season.

Ending the domestic season firmly in Barcelona’s shadow, unless Zinedine Zidane’s men can travel to Villarreal and beat them on Saturday evening and hope Eibar beat Atletico Madrid, then further pain will ensure for Los Blancos as their city neighbours Atletico will also finish above them.

However, they still have the small matter of the Champions League final against Liverpool to turn their season around.

The Bats are back after two seasons in the doldrums with a top-four spot cemented. The six-time La Liga winners will be contesting the Champions League next season but fourth is as good as it can get for Marcelino García Toral’s men sitting five points behind Real Madrid in third and ten points clear of Villarreal in fifth as they prepare to welcome Deportivo to the Mestalla.

The battle between Villarreal and Real Betis has been fascinating this season and the fight for fifth spot between the two is firmly on.

Both sides are locked on 60 points with the same win, lose and draw record, however, Villarreal have a superior goal difference of seven but face a trip to face Barcelona whilst Real Betis have a trip to face Leganes.

Real Betis play their game on Saturday, so Villarreal will at least have the advantage of knowing exactly what they must do in order to finish fifth.

It has been a disappointing campaign for Sevilla and they are one of only two sides in the top ten with a negative goal difference (Eibar the other).

This means they can still be overtaken by eighth-place Getafe if they lose at home to Alaves on Saturday and Getafe pick up three-points at Malaga. 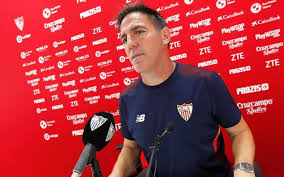 We have mentioned the chance to finish seventh for Getafe but there is also the prospect of ending the campaign in 10th if results go against them.

Both Eibar and Real Sociedad could leapfrog the deep blues but a top ten is assured no matter what.

However, as they face the already relegated Malaga, picking up at least a point is a likely scenario.

Another impressive campaign from Eibar leaves them eyeing eighth spot but also under threat from Real Sociedad in tenth Girona in eleventh and Alaves in twelfth.

A minus six goal difference does little to help the minnows cause but avoiding defeat to Atletico Madrid on Sunday will ensure a top ten finish.

Real Sociedad have the potential to finish as high as eighth or as low as thirteenth depending on results.

However, due to their strong goal difference of plus eight, thirteenth is a highly unlikely scenario.

To have any hopes of eighth, they must beat Barcelona at the Camp Nou on Sunday and hope both Eibar and Getafe lose their matches.