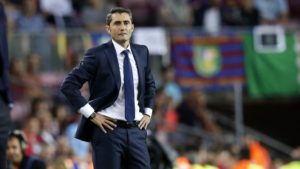 Few would have expected Barcelona’s unbeaten league run to end against a team that was in a relegation battle not too long ago. However, the 5-4 loss against Levante does not tell the whole story, as Levante had a four-goal lead just a few minutes into the second-half. Barcelona probably came in with their worst defensive performance in recent memory. The result gives rise to several questions for manager Ernesto Valverde, who should have been basking in the limelight after leading the club to a La Liga title.

Defender Yerry Mina has had to face a barrage of criticism for the last few days. The 23-year-old was brought in from Brazilian outfit Palmeiras for a substantial €9 million. Even though he did not concede a goal in his first two appearances for Barcelona, the horrendous showing against Levante may have effectively brought curtains to his Barcelona career. There have already been rumours about Liverpool making an offer for the defender, who has had a very little first-team football.

Mina would have probably been looking at a potential loan move in order to acclimatise to European football, but players rarely get a second chance at the Camp Nou.

It is no wonder that several Barcelona players are expected to have an influential role at the upcoming World Cup 2018, according to the latest World Cup betting tips.

Yet, Valverde did his best to try and defend the player. “Yerry Mina showed personality at certain moments of the match and I haven’t seen him make a mistake, you have to take into account how good our opponent was,” said Valverde in defence of his player.

Barcelona have had a long spell of trouble with regard to centre-backs. Ever since the partnership between Carlos Puyol and Gerard Pique was broken up due to the former’s retirement, Barcelona have gone through a string of centre-backs. In fact, the club even used midfielder Javier Mascherano as a central defender for several years. Valverde’s public backing of the player shows that he still has faith in the 23-year-old, but it remains to be seen if this will translate into more appearances.

Liverpool are in a similar situation with regard to central defenders, as the club has not had strong and consistent central defenders since the departure of Jamie Carragher. It is highly unlikely that Mina will next move to a club – even if it is on a temporary basis – where first-team opportunities will be scarce.