The 2017/18 La Liga season has just four games left for a majority of the sides and for some, the campaign has been an overwhelming success no matter what happens in the remaining games whilst for others, it has been a disaster.

However, as we like to focus on the positive side of the game, we thought what better time than now to check out who deserves a shot at the manager of the season accolade after nine months of hard work.

We may as well start at the top and you simply cannot exclude the man who wins the league title.

Granted, the league title is not officially in the bag just yet but victory over Deportivo on Sunday will take care of that and Barcelona’s domestic dominance has made the rest of the league look paltry.

Valverde has also added the Copa Del Rey to the Barce trophy cabinet just to compound his sides domestic dominance.

Although Valverde may have come in for some criticism for his sides early Champions League exit at the hands of Juventus, this list is all about La Liga so quite frankly it does not matter one bit.

Newly promoted Girona have a great shout for the team of the season after gatecrashing the top ten in their debut La Liga season.

Girona’s ground only holds 13,500 spectators but that hasn’t stopped the minnows from first cruising to safety and then for a long time looking like outsiders for a European spot. 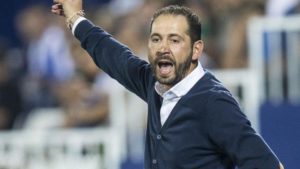 43-year-old Pablo Machin has been at the helm of Girona since 2014 and guided them to second in Segunda last season before adapting to life in the top flight with aplomb.

The season will mostly be remembered for beating Real Madrid in October, but Machin and his team deserve much more credit than that with a top ten spot looking more than likely.

Former Las Palmas head coach Quique Setién took over the Béticos and has unlocked the sides potential thanks to some smart signings such as Cristian Tello.

The side find themselves fifth in the table with four games to go and within touching distance of ensuring they finish in a Europa League spot for next season.

Whatever happens now, it will be Betis’s highest league finish since the 2004/05 season and Setien deserves a majority of the credit for his transfer business and the way he has gotten Betis playing on the pitch.

Toral came to Valencia in the summer with a strong CV having previously managed Sevilla and Villarreal among others.

It was going to take a strong man to reawaken the sleeping Valencian giant and that is exactly what Toral has done.

After two seasons in which Los Che have finished in the latter half of the table, Toral has all but restored Valencia to the top four as they sit 10 points above Real Betis in fifth with Champions League football set to grace the Mestalla once again.