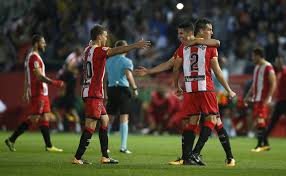 This season, many people have been getting carried away by Barcelona’s dominance at the top of the table and Real Madrid’s domestic troubles.

But the real story of the season still lies in the upper reaches of the division, just not with teams one may have expected.

Girona, Real Betis and Getafe find themselves seventh, eighth and ninth respectively and above the likes of Athletic Bilbao, Real Sociedad, and Espanyol.

Remarkably, newly promoted Girona find themselves just two points behind Sevilla and chasing down the unlikeliest of European places for next season.

This has opened up the floodgates in the betting markets with plenty of free betting offers being lauded on these three sides as the unpredictability of the mid-table is making for some great action for the punters and bookmakers alike.

But who are these three underdogs and why are they performing so well?

Despite sounding like they belong in the Italian League; little Girona are making a big splash in La Liga this season and after forming 87 years ago.

Managed by Pablo Machin (formerly of Numancia), the club were expected to be the whipping boys of the division but victory over Real Madrid early doors soon made the rest of Spain (and the world) stand up to attention.

With 43 goals scored this season, the club based in Catalonia have found the back of the net more often than big hitters Sevilla and Villarreal.

How they cope with the demands as the season draws to a close remains to be seen but so far they have coped admirably and the fairy-tale could still end with European football.

Now what a story that would be.

Perhaps the most established of the three and not a huge surprise to see Béticos break into the top ten, but it is still a step in the right direction for a side who have spent most of their history jockeying between the top two divisions.

Quique Setién is the man at the helm and the former Las Palmas man has transformed the side back into an outfit that will give anyone a game.

Signings preseason such as former Barcelona man Cristian Tello is testament to that and back to back wins heading into the international break has only strengthened the team’s position in eighth.

Betis’s only downside is a weak defence which has shipped 53 goals this season which sees only relegation candidates Deportivo and Las Palmas with a worse record.

Perennial yo-yo club Getafe are enjoying one of their finest (and safest) seasons for a long time after earning promotion like Girona just last season.

Again, much like their fellow promoted side, not much was expected of Getafe but former Alaves manager Pepe Bordalás has gotten the most of this side and are currently enjoying the safety of a top half position.

Their defence has been a prime reason for this rise conceding just 27 goals so far in the campaign which is less than Real Madrid and only bettered by Barcelona and Atletico Madrid.

The rise of the underdogs this season has been the perfect side story and one that could see any of these three sides make a claim for the team of the season.