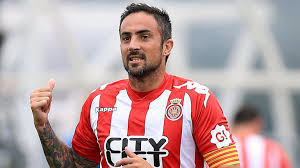 Who? Aren’t they Italian?

That is the response we have mostly been getting when we rave about Girona and their antics in their debut La Liga season.

The Spanish minnows deserve plenty of credit in the footballing world than perhaps they have been receiving for their heroic exploits in their first ever five months in Spain’s top flight.

Sixteen games in and little Girona sit seventh in the table after six wins and five draws leaving Pablo Machín’s band of unfancied warriors above the likes of Spanish heavyweights Athletic Bilbao and Real Sociedad.

A superb home win over Real Madrid in October should have been the catalyst for the rest of Europe to sit-up and take note but for some reason still no-one seems to notice Girona, who keep ripping up the rule book albeit quietly.

Beating a Madrid side who were going through something of a quandary with an out of form Gareth Bale probably dampened the surprise somewhat but it shouldn’t have as Girona are a club with a catchment area and stadium the equivalent of Oldham Athletic in England.

One cannot help but think that if the Latics were to beat say Manchester City, it would cause quite a stir, but Girona are a club that have been on the up for a while and their latest La Liga odds with 888sport are testament to that.

Since forming in 1930 after discussion in a city café, Girona have spent their whole existence just getting by fluctuating between Spain’s lower ranks.

However, their fortunes started to change when during the 2008/09 season they earned promotion to the Segunda division. This in itself is hardly a shock as the side had been in the second tier previously but never managed to maintain it for long before relegation took hold.

Off the pitch, the club started to strengthen as well thanks to the astute business acumen of Ramon Vilaró, Joaquim Boadas and Josep Slim who purchased 72% of the club in 2010.

A plan to balance the books was successful and even a reserve team bought to life and a number of near misses followed before finally promotion was earnt by finishing runner-up to Levante and top-flight status completed 87-years after formation.

Girona’s flying start to the season has a lot to do with former Middlesbrough hit man Cristhian Stuani.

After failing to impress in the Premier League and unable to help Boro avoid relegation, Stuani made the move to Catalonia in the summer and has since taken La Liga by storm.

Nine goals in fourteen appearances leaves 31-year-old Stuani only bettered by Lionel Messi and Simone Zaza in the scoring charts and there is much more to come from the Uruguayan.

If Girona can maintain this level of form, then talk of mere survival will turn to the possibility of gate crashing Europe next season. Although that may still seem unlikely, nobody gave them a chance against Real but look what they did there!

They may appear quiet, but Girona have a sharp bite which the rest of La Liga is finding out the hard way.