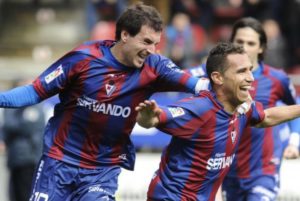 A quick glance at the top of the La Liga table will hardly throw up many surprises with the big four of Barcelona, Real Madrid, Sevilla and Atletico Madrid making up the usual top four spots.

However, if you take the time to work your eyes down just another four places you will notice a name you may not be too familiar with sitting amongst the heavyweights of Spanish Football.

SD Eibar are a small club by comparison to many of the clubs in La Liga but they harbour big ambitions.

Their home ground the Ipurua Municipal Stadium only holds 7,083 spectators and since their formation 77 years ago, are only enjoying their third ever season in Spain’s top flight.

However, none of this has stopped head coach José Luis Mendilibar from turning little Eibar into contenders for a Europa League slot for next season, something not even the Football tips by FootballBets would have predicted.

Despite only being in their third season in the top flight, Eibar do boast a rich history and can name some big names as former players.

Xabi Alonso, David Silva and Federico Magallanes are all players who have had a spell with the Basque Country club despite spending a majority of its history in the Tercera and Segunda Divisions.

What makes SD Eibar even more unique is the fact that is a fan owned club with more than 10,000 shareholders from 69 countries across the world, allowing it to achieve a truly global reach.

After achieving promotion to La Liga at the end of the 2013/14 season with a 1-0 win over Deportivo Alaves, Eibar were lucky to avoid a swift return to the Segunda Division after finishing in 18th place (the last relegation place).

Fortunately for everyone associated with Eibar, that was the season 13th placed finishers Elche were punished with relegation for financial mismanagement, and in a one off, 18th place became safe.

Since then the club has gone from strength to strength finishing a club record high 14th in La Liga last season whilst this campaign the club currently occupy eighth.

Eibar have a likability to them due to their small size which they are taking advantage off, tough free flowing football is winning them many plaudits from peers and fans alike and despite being small, they certainly pack a heavyweight punch.

We could well be seeing Eibar gracing our screens across Europe next season in the Europa league.

After all, being little doesn’t mean you can’t make a big noise, just ask Lionel Messi.