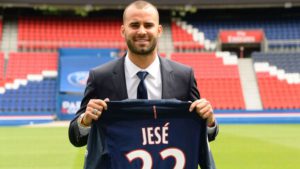 Having only signed for French champions Paris Saint-Germain during the summer from Real Madrid, Jese has ended his miserable time abroad by signing with La Liga side Las Palmas until the end of the season. The 23-year-old was in high demand, with English Premier League side Middlesbrough having also agreed a deal to sign the former Spanish Under-21 forward. However, Jese was reportedly determined to return to his homeland, with Los Amarillos currently sitting in 11th place in the Spanish top flight.

Having departed Champions League winner’s Real Madrid after five years at the Bernabeau for 25 million Euros, Jese made only nine Ligue 1 appearances, with just one coming as a starter. Former Sevilla boss Unai Emery has clearly not been impressed by the forward, allowing him to gain first-team action in Spain instead. Las Palmas have been one of the surprise packages in La Liga this season, with Kevin-Prince Boateng just one of many players to impress. Fans at the Estadio Gran Canaria will be hoping the arrival of Jese will continue to aid their campaign, with Betway backing them at 20/1 to qualify for European competition come the end of the season.

Middlesbrough had appeared to be in pole position to add Jese to their ranks, with former Real Madrid player and assistant coach Aitor Karanka keen on bringing in a player that he knows well. However, Jese made it clear to his new employees how grateful he was to return to Spain, with supporters undoubtedly looking forward to seeing him in the yellow of UD Las Palmas. However, with the club seeing off Valencia by three goals to one last time around, the forward faces a battle to earn himself a place in the starting eleven under Quique Setién.

Club president Miguel Angel Ramirez has stated that Jese has taken a considerable pay cut to join the La Liga outfit, a further indication of his disappointment with life in the French Capital. Fixtures with Granada, Sevilla and Malaga over the coming weeks should see Jese return to his best form.