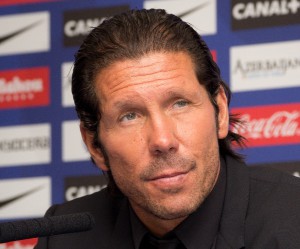 Once again it is Atletico Madrid who sit proudly top of La Liga looking to repeat their exploits from their title winning 2013/14 season. Whilst Diego Simeone’s men’s La Liga title odds are still pretty long, they still could be a good value bet for the Primera Division this season.

However, Sevilla will harbour designs on top spot themselves as they welcome Atletico to the Ramon Sanchez Pizjuan on Sunday afternoon in what promises to be a heavyweight clash.

The Los Rojiblancos (or the red and whites to you and me) come into the game of the back of four straight wins including beating Dinamo Zagreb in the Champions League on Tuesday night.

Home form has been impressive. Four wins from four home games this season scoring nine along the way (although six were against Espanyol on the opening weekend) has been Sevilla’s biggest strength but away from home things have been a little patchier.

A 3-1 defeat away to Athletic Bilbao at the end of September was a blow but that was the last they have been beaten in all competitions.

As you would expect from a team sat at the top of the table, recent form has been pretty good for Diego Simeone’s men.

A stonking 7-1 hammering of Granada last time out in the league was followed up with a 1-0 victory over Rostov in the Champions League on Wednesday.

Yet to be beaten this season, Atletico have also been scoring for fun. Antoine Griezmann has six (joint highest in the league) of Atletico’s 21 league goals scored so far despite starting the campaign with a disappointing draw at home to Alaves.

Based purely on their recent head to head record then this should be a walk in the park for the Madrid side.

Unbeaten in their last six matches against Sevilla. Simeone’s men have drawn three and won three and not lost since October 2010 when Sevilla where the victors 3-1.

Last season Atletico took four points from Sevilla beating them 3-0 and also claiming a 0-0 draw to leave them with a vast superior recent form record between the two.

Forget last season as there are more factors involved this week. For one Sevilla have made their home a fortress this season and will not be bullied in front of their fans.

Equally both sides had mid-week Champions League ties to contend and although both won, Atletico played a day later in the not so local Russia. No easy place to go and they could suffer a Champions League hangover against a slightly fresher Sevilla side.