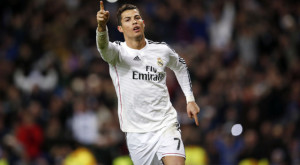 Since 2010 the Pichichi award that went to the highest scorer in a Spanish La Liga season was dominated by just two names – Cristiano Ronaldo and Lionel Messi. But the 2015-16 season saw a new entrant.

Luis Suarez who had joined Barcelona in the 2014-15 season from Liverpool, took some time to find his feet at the Catalan club. His 27 matches in that debut season fetched him 16 goals, which wasn’t bad by any means. But the following season was even better. From just 35 appearances, the Uruguayan striker scored an astonishing 40 goals and won the Pichichi hands down. In the current season, he has found the back of the net thrice from just two outings and there’s no saying that he is the top contender for La Liga’s top spot as the highest goal scorer.

Cristiano Ronaldo is a goal machine and only spells of injury can stop him from being the top scorer in the La Liga. The 2015-16 season saw him getting 35 goals from 36 games in what was considered a “down” or “out of form” year for him. Despite that, he was by far the highest scorer in the UEFA Champions League. At 31, there are question marks about his fitness and that could probably prevent him from being the top scorer in the Spanish League. But the number of opportunities he gets to score and convert could keep this Real Madrid star in contention.

Lionel Messi: Injuries prevented the Argentine and Barcelona talisman from playing all the 38 League matches, restricting his playing count to 33. But still he managed 26 goals from those outings. Although it’s a far cry from the 43 he got in the 2014-15, his penchant for goals cannot be ruled out. He already has two goals from his two outings in the current La Liga season and looks good for a tally of 40.

Gareth Bale apart from being one of the most expensive players in the world is a prolific scorer. Serious injury issues restricted the 27-year old Welshman match appearances in the 2015-16 season of the La Liga to just 23. But that was enough opportunity for this prolific Real Madrid winger to score 19 goals. In the current 2016-17 season, Bale expects to feature in most of his club’s 38 League outings, enabling him to potentially double his last year’s tally. Even with Ronaldo’s presence upfront, he is one of the top contenders for the Pichichi award.

Neymar, although playing second fiddle to Messi and Suarez as far as Barcelona’s scoring sprees goes, is growing from strength to strength with each season. His initial season with the Blaugrana in 2013-14 saw him getting just 9 goals. That improved considerably to 22 in the following season and to 24 in the one after that. Even with Messi and Suarez around, he could end up surprising every one and come on top of the scoring count.

Antoinne Griezmann: He emerged Euro 2016’s top scorer and although he may have got just 22 goals in 2015-16, his ascendancy as a striker for his club Atletico Madrid cannot be denied. This 25-year French striker is physically one of the fittest players around and virtually injury-free. He featured in all his clubs 38 League matches in the 2015-16 season and in 37 games before that. He is likely to do the same this time and with coach Diego Simone’s strategy of increasingly playing with just one striker, Griezmann is line to achieve the 35-goal mark this Spanish season. He is one more serious contender for the Pichichi.

I think Griezmann is worth a small punt at value odds of 34/1, for a larger stake Suarez is a safe bet at Odds of 2.5. Please check out our Football Betting Tips Blog for further football betting info.